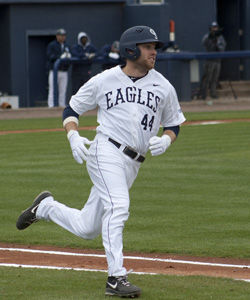 One run in the eighth inning propelled Western Carolina University to a 9-8 win, taking a 2-0 series lead and extending the Georgia Southern University baseball team’s losing streak to six games.

GSU mounted a comeback after trailing 8-4 after six innings. The Eagles scored four runs, two in the seventh and two in the eighth to tie the game at 8-8.

Aaron Attaway scored the game-winning run in the bottom of the eighth inning to seal the deal for the Catamounts and put them up 9-8.

The Eagles will have the chance to go above .500 in Southern Conference play with the final game tomorrow at 1 p.m.