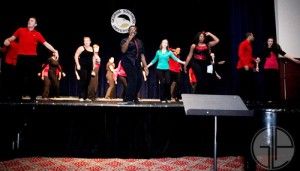 Adrenaline Show Choir will fill the Performing Arts Center with its rendition of “Against All Odds” Thursday at 7 p.m.

Tickets are $5 and can be purchased from any Adrenaline Show Choir member or at the box office in the PAC. Members from Adrenaline will sell tickets in the rotunda until Thursday. The show will be two hours long with a 15-minute intermission.

The show will be comprised of various songs and dances to show the work and practice that the show choir put in throughout the year, Michael Bailey, president and director of Adrenaline Show Choir and junior sociology major, said.

There will be a large variety of songs and genres showcased, with influences from Broadway, current pop, 80’s, R&B, childhood favorites and “Glee.”

“I’m singing a song called ‘Panic Station’ by Muse. It’s from their new album, so I’m super excited, but it’s going to be a little bombastic,” Taylor Tyson, secretary for Adrenaline show choir and sophomore writing and linguistics major, said.

The show will be more extensive than the previous year. Adrenaline Show Choir has been working on group numbers from the beginning of the year, which has everyone in it. There will be six or seven group numbers with the entire cast, Bailey said.

“It’s looking really promising this year. We started off slower this year because we had a transfer of leadership from our old director to our current director, but we have a lot of fresh talent this year and a lot of really talented individuals,” Tyson said.

“I went last year, and it was awesome. My jaw was on the floor, and I was dancing the whole time,” Libby Butgereit, sophomore public relations major, said.

Bailey said, “At first glance it’s a performance group, an opportunity to sing and dance and work on what you love to do.  In the end we like to consider it a family.”