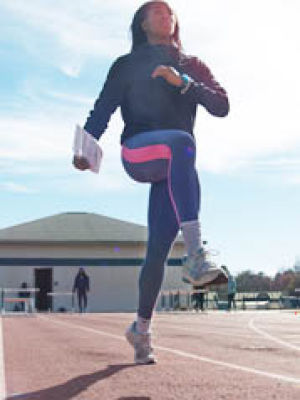 The Georgia Southern University track and field team competed in the University of North Florida Invitational Saturday as a final, full-squad tune up before the outdoor championships.

Junior Aishya Wofford has not competed much this year, but she starred in the discus event with a throw of 45.23m (148’5”). She finished fourth in the event, but the throw was the second longest in GSU history.

“We are so happy for Aishya. This is really only her second full meet, so to achieve this is great, but we know she has the potential to do more,” head coach Marlo Mincey said in a news release.

It was a busy day for Freshman Ashleigh Rasheed as she competed in the javelin throw, shot put, triple jump and long jump. Her best finish came in the long jump where she jumped a distance of 5.23m (0.8 wind, 17’2”) and landed in seventh.

In the 100-meter dash, senior Ebony Carter and freshman Alyssa Felton turned in the best results for the Eagles. Carter’s final time of 11.90 seconds placed her in a tie for third, and Felton finished in sixth at 12.02.

The duo of Carter and Felton also competed in the 200-meter dash event that included more than 60 participants. Carter finished at 24.85 (seventh) and was able to best Felton once again, who finished at 25.06 (13th).

It was a solid day for the A-teams in the relay events with both able to secure top-five finishes.

The A-team of Carter, Felton and seniors Amber Vaughn and Jasmine Billings was able to capture third place in the 4×100 meter relay at 46.72.

In the 4×400 meter relay, the A-team made up of juniors Tiffany White and Dana Edwards, Vaughn and sophomore Kimberly Thomas finished with a time of 3:55.89 (5th).

“Every week we always want to run faster but even when things don’t go well, it’s good to see we have performances that rank high in the conference,” Mincey said in a news release.

With the Southern Conference Indoor Championships quickly approaching on April 20-21, every opportunity to prepare is important.

“On the track and in our field events, we have to use these next couple of weeks to continue to improve,” Mincey said in a news release.

The Eagles will only bring a partial squad to compete in the Pepsi Florida Relays in Gainesville, Fla. The tournament begins this Friday.