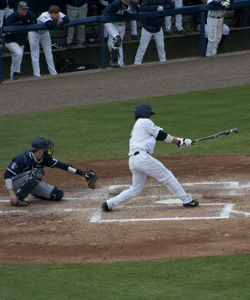 Unlike the first two games of the series the Eagles struggled on offense despite nine hits the Eagles managed one run and drew no walks.

Kyle Webb (5-2) pitched a complete game for the Phoenix recording 11 strikeouts giving up only nine hits and no walks.

The Eagles will try and pick their bats back up against North Florida University on Tuesday at 6 p.m.