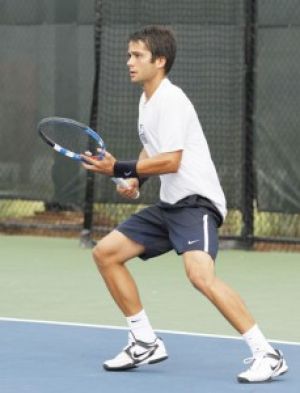 The Georgia Southern University men’s tennis team went 1-1 over the weekend, losing to the University of North Carolina at Greensboro 6-1 and beating Elon University 4-3.

The weekend started off rough for the Eagles after UNCG dominated in singles play, winning all six matches.

Freshman Rayane Djouad took his opponent to a thrilling third set, but came up short with a 2-6, 7-5, 6-1 loss at the No. 2 singles spot.

The doubles portion of the match was a positive sign for the Eagles after winning two of three points.

Djouad and sophomore Andrew Dromsky defeated their opponents in the No. 2 doubles spot 8-5. It was followed by GSU’s last win of the day after Senior Alex Doherty and sophomore Kyle Hoffman won at No. 3 doubles 8-6.

The Eagles’ last task of the weekend was to face the Southern Conference leader, Elon University.

Verdam and Junior Oliver Webb took Elon’s 34th-ranked doubles duo to the wire, but still lost 5-8. The doubles teams of Dromsky and Djouad and Hoffman and Doherty both lost their matches 2-8.

The Eagles came from behind thanks to their play in the singles portion of the match.

Djouad, Webb and junior Marco Osorio all won their individual matches in three sets. Dromsky clinched the match for the Eagles after the fourth three-set match of the day with a 6-4, 6-7 (5-10), 6-2 win.

“I’m so proud of the group. Everybody, even in doubles and on the courts that lost and were down, had a great fight the whole way through,” Nick Zieziula said in a news release. “Everybody, one through nine, every single person, pulled their weight whether they were cheering or helping out any other way they could, just all the way through.”

The 9-7 Eagles look to improve their 5-3 SoCon record with final home matches of the season against Samford University on Friday and University of Tennessee Chattanooga on Saturday.