Eagles are hobbling into the blue and white game 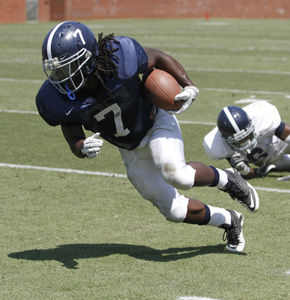 The Georgia Southern University football team, riddled with injuries, will have its annual Blue and White game with the Eagles’ offense versus the Eagles’ defense Saturday.

Many Eagles are suffering injuries that have held them out of practice as well as the two scrimmages so far this spring, so younger players are forced to step up and play.

“This gives us the opportunity for those guys to get some work, and the more reps, the more plays we can get with those young guys, the better we are going to get, but I’d prefer our starters healthy and be out there,” head football coach Jeff Monken said in a news release.

Freshmen quarterbacks Kevin Ellison and Vegas Harley have both stepped up their games leading the second team and first team respectively. Both Harley and Ellison were able to lead their respective teams on scoring drives in both scrimmages.

With the loss of star seniors Brent Russell and J.J. Wilcox, the Eagles’ defense will be forced to look elsewhere for leadership as the team will try to find replacements for each of their positions.

Rising senior linebacker Kyle Oehlbeck and rising senior defensive tackle Blake Riley may be the two players that step up and fill the roles of Wilcox and Russell as leaders on the defense.

Oehlbeck and Riley both stood out in the two scrimmages the Eagles have held this spring by getting to the quarterback and making big hits in the open field.

However, the Eagles in the final scrimmage on Saturday had mishaps with both the offense and the defense.

“We have to improve as tacklers and be more effective blocking. We missed a lot of assignments and had some foolish penalties. There is a lot we need to correct,” Monken said in a news release.

The players will watch film of their mistakes and hopefully correct them going into the blue and white game on Saturday.

“We’ll have notes for them so they can compare what happened to what the play was and what the defensive call was, and they will know where there are issues. Then, the next time we get together and meet, we talk with them, and that’s an important, teachable moment,” Monken said in a news release.

GSU fans will get to see if the Eagles have corrected their mistakes on Saturday at 1 p.m., and fans may also get the chance to be an extra in the movie “Erk” as filming is set to take place at the game. The film crew is asking fans to dress in 1980’s attire.