Phoenix hope to rise against Eagles 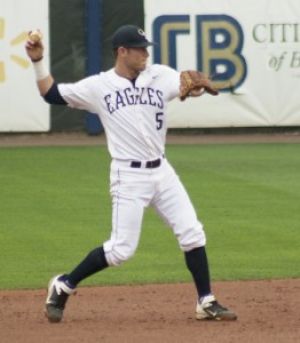 Once sitting atop the Southern Conference, the Eagles have dropped to sixth place in the SoCon and currently hold a 10-11 record in the conference after losing their last three conference series. The Phoenix is 14-7 in the conference and has been steady the entire season.

Similar to their matchup with Western Carolina University last weekend, the Eagles will have to keep up with the Phoenix offense in order to win. There are heavy hitters within both lineups, but as of late the Phoenix lineup has been more successful.

Junior infielder Sebastian Gomez, junior catcher Ryan Kinsella and junior shortstop Antonio Alvarez have all played in over 40 games this season, and each player is batting above .300. Although Gomez has 30 RBIs and Alvarez has 28 RBIs, Kinsella is the player to watch in the series.

Kinsella is batting .333 with 56 hits and 56 RBIs. He leads the Phoenix in both categories. Kinsella also leads the SoCon in home runs with 16. Kinsella has 14 multiple RBI games and at one point in the season had a 15-game hitting streak. Currently Kinsella has reached base in 19 games straight, a streak the Eagles will want to end.

In order to combat the Phoenix offense, the top of the lineup will have to start hitting like it was at the beginning of the season.

Junior infielder Ben Morgan is tied for second in the SoCon in stolen bases with 18, but in order to steal more bases Morgan has to get on base more.

Morgan’s batting average has dropped well below .300 as he is now hitting .269, also leading the SoCon in strikeouts with 48.

An x-factor for the Eagles is sophomore second basemen Tyler Avera who recently has really come on strong for GSU. In last weekend’s series versus the WCU Catamounts, Avera recorded six hits in 11 at-bats and three RBIs.

This upcoming series for the Eagles will be a true test of their offensive firepower and consistency as they take on the Phoenix at J.I. Clements Stadium beginning at 6 p.m. tomorrow.