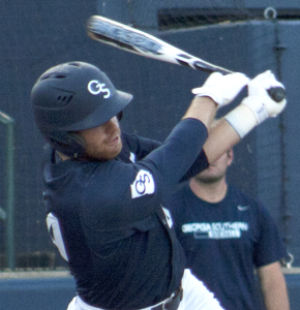 The bats of WCU were GSU’s downfall. The Catamounts beat the Eagles just like they have beaten most of their opponents this year: with a lot of hits. WCU leads the SoCon in number of hits and did not slow up against the Eagles tallying 37 base hits in just three games.

Friday’s game, a 9-3 WCU victory, was bolstered by a seven-run second inning for the Catamounts. The Eagles, which scored one run in the top of the second, would strike for two more in the third but would not do so for the rest of the game.

Senior starter Justin Hess pitched 5.2 innings and only allowed two earned runs. The seven-run beat down was punctuated by fielding errors. Hess’ two earned runs were the only earned runs of the game, and the Eagles finished with 5 errors.

GSU’s comeback bid on Saturday was denied when the Eagles were down 8-4 before scoring two runs in both the seventh and the eighth to tie the game 8-8 before a slap single scored the winning run for the Catamounts.

Eagles junior outfielder Robbie Dodds had the most hits in the game, going four for five from the plate with two runs and an RBI. Dodds has been the Eagles’ most consistent hitter and leads the team with a .366 batting average.

Another big inning was the cause of the third GSU loss. A five-run fifth inning sent the Catamounts past the Eagles 7-4 to complete the series sweep.

The team will get a much-needed break before hosting Elon University this weekend at home.