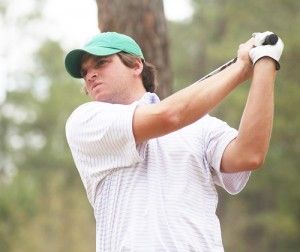 After an impressive season, the Georgia Southern University men’s golf team will be heading into the Southern Conference championship Sunday in Charleston, S.C.

The Eagles will be looking to put their disappointing performance at the Gary Koch Invitational behind them and get back on the winning track to finish out the SoCon season.

The Eagles started the season with a bittersweet performance at Kiawah Island, home of the 2012 PGA Championship. On one hand sophomore star Scott Wolfes won the Invitational title at the Ocean Course as an individual, but on the other, the team finished in less-than-stellar 11th out of 15 teams.

The Eagles would find their wings and soar as the season went on by winning back-to-back collegiate tournaments in October and kept the momentum going over the long holiday break.  When they arrived for the spring semester the Eagles picked up where they left off winning another title at the Wexford Intercollegiate in February.

Over the long and challenging season the Eagles placed in the top-5 an impressive five times, three of those claiming first. Scott Wolfes would be honored twice as SoCon player of the week and assistant coach Carter Collins was named a semi-finalist for the Strickland Award for the second consecutive season.

In every tournament attended by more than one SoCon school, the Eagles have placed in the top 3 for every one they entered. They are currently ranked No. 1 in the conference with a team best stroke average of 292.60. They lead the SoCon in team top-10 finishes this season and are one of only three SoCon teams to win a tournament.

The Eagles will expect heavy competition from rival University of Tennessee Chattanooga, which was last year’s number one seed and defending SoCon champion. UTC has not won a tournament this year, but it has two players on the conference top-5 leaderboard and can always cause problems for the Eagles.

The Eagles were runner-up in the SoCon Championship last year and won the title in 2011. This year to team is looking for its fourth SoCon title and is hoping for its 15th school NCAA Championship appearance, a place it hasn’t been since 2010.