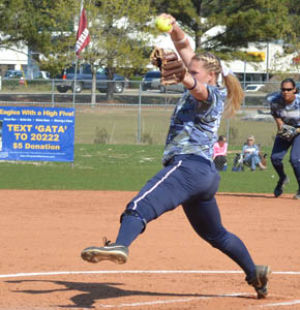 Georgia Southern University’s softball team (16-20) will wrap up its home play in a doubleheader against Mercer University (21-19) before it returns back to the road.

This past weekend, the Eagles came home after a long road swing, but GSU went 1-2 against Furman University. The Eagles started out strong winning their first game of the weekend, but then falling to the Paladins twice in a double header on Saturday. Similar to GSU, Mercer just lost a home three-game weekend series to Jacksonville University.

GSU’s pitching is significantly stronger than the Bears’, so the Eagles need to take advantage of that and show their strength in the circle. All three pitchers for GSU look strong compared to Mercer’s pitchers. Junior Sarah Purvis with 130 strikeouts, junior Allie Miles with 77 strikeouts and sophomore Brooke Red with 44 strikeouts combine to outnumber Mercer’s two pitchers’ combined 99 strikeouts by a long shot.

The Eagles also need to rely heavily on their pitching because Mercer’s hitting is significantly stronger. Mercer has a total of four players that have over 20 runs for the season, led by McKenzie Woody with 36 runs. Even though GSU has played four less games than the Bears, the Eagles do not have one player with over 20 runs. Junior infielder Kourtny Thomas is leading the way for the Eagles with a total of 17 runs and 8 home runs for the season.

The Eagles will face the Bears tomorrow at 3 p.m. and 5 p.m., followed by a weekend series against the University of Tennessee at Chattanooga this Saturday and Sunday.