Track and field gears up for outdoor championships 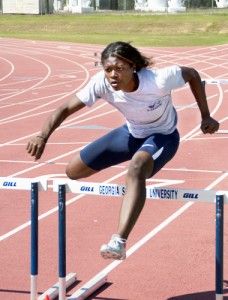 The Georgia Southern University track and field team aims to soar past the competition this weekend in the Southern Conference Outdoor Championships.

Instead of competing, GSU stayed home last weekend to fine-tune its race strategies and mentally lock in on the Championships.

Back in February, the Eagles finished fifth at the indoor championships, and head coach Marlo Mincey said that the team’s depth was lacking.

Over the course of the outdoor season, Mincey has been consistent in expecting better times and distances from her team to improve the depth issue.

Freshman Alyssa Felton sits atop the SoCon rankings this season in the long jump event after her jump of 5.83m (19’ 1.5”) at the Florida Relays on April 4.

Senior Ebony Carter always seems to save her best performances for the outdoor championships. For the past two years, Carter has walked away as the champion in the 100-meter dash, and the Eagles will need her to continue this trend over the weekend.

Carter’s top result of the season came at the Florida Relays as well when she crossed the finish line in 11.88 seconds in the 100m event. Her time currently ranks third in the SoCon this season.

Senior Jasmine Billings will enter the tournament looking to defend her title in the 100-meter hurdles. Billings captured first place in last year’s outdoor championships with a time of 13.94 seconds.

This year at the Florida Relays, Billings turned in her best result of the season with a time of 14.77, which ranks sixth in the SoCon.

The field is mostly balanced, but the Eagles’ toughest competition will probably come from the Western Carolina University Catamounts.

The Catamounts’ strongest event will be the 400-meter run. The trio of freshman Kendra Douglass and sophomores Genevieve Emrick and Lena Elliott hold the top three spots in the SoCon rankings this season for the event.

Also for the Catamounts, freshman Tayla Carter currently ranks first in the 100m dash (11.52) and second in the 200-meter dash (23.85). If she is able to repeat those times, then she will be tough to beat.

The Eagles will welcome 11 women’s teams and nine men’s teams to Statesboro as they host the championships beginning at 8 a.m. Saturday at the Track and Field Complex at Erk Russell Athletic Park.