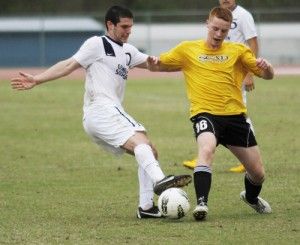 The Georgia Southern University men’s soccer team’s spring season came to an end on Sunday after defeating the Savannah College of Art and Design 1-0.

In a game where goals were at a premium, the first half ended in a scoreless tie. There were multiple missed opportunities by GSU to break the game open, but sophomore defender Trent Doty had a clutch second-half goal to finally break the tie. Doty’s goal would be all GSU needed to fend off SCAD.

“This year has just been about continuing to play quicker, particularly in the final third, but the goals just didn’t come,” head coach Kevin Kennedy said. “I thought we had a chance to score four or five.”

With the spring season coming to an end, Kennedy still expects his squad to continue to improve with the fall season on the horizon.

“I thought today we got some questions answered. I thought Thomas Valikonis was very, very good for us now that he has come back healthy, and then we had some other players that we moved around that we thought did a great job, and now we can make plans for the fall,” Kennedy said.

Looking ahead for the GSU men’s soccer program, finding a conference to call home following GSU’s move to the Sun Belt Conference in 2014 has been a top priority of the athletic department. The conference search, however, might not send GSU searching too far from home.