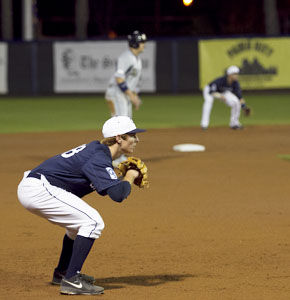 The Eagles now sit in the second position in the Southern Conference standings behind Elon University after being number one for most of the season.

The Buccaneers have struggled all season resulting in their 11-20 record, the exact opposite of the Eagles’ record of 20-11.

Unfortunately for the Eagles, they have to travel to face the Buccaneers, which are an impressive 11-5 at home. The Buccaneers have yet to win one game on the road or at a neutral site, as they are 0-15 on the road.

The Buccaneers will look to get ahead early, as they have outscored their opponents 22-16 in the first inning. It will be the Eagles’ responsibility to either respond or prevent them from taking an early lead.

The only two players to play in all of the Buccaneers’ 31 games are sophomore outfielder Bobby Ison and junior infielder Alex Tomasovich, who both have the ability to hold their own at the plate.

Though sophomore Chase Griffin and junior infielder Ben Morgan have struggled as of late with their batting averages dropping below .300, the two still have combined for 58 RBI this season.

Offensively, the Eagles can still count on senior first basemen T.D. Davis and junior outfielder Robbie Dodds, who both still bat over .300 with batting averages of .349 and .365 respectively. The two combine for 79 hits and 44 runs.

At 3 p.m. today, the first pitch will be thrown as the Eagles hope to stop their recent skid of losing.