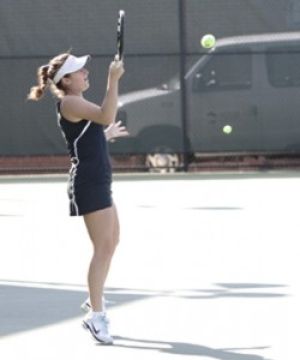 The Eagles were coming off a 1-6 loss on Saturday by the University of Tennessee at Chattanooga, so a win on senior day was important.

GSU started off slow after dropping all three doubles matches, but took control in singles play, winning five out of the six singles matches.

Senior Natalie Maffett won her final home match of her career 6-2, 6-0 in the No. 6 singles spot. The win for Maffett was her tenth singles win of the year.

Junior Paola Garrido and freshman Mary Phillips Smith picked up huge wins for the Eagles, giving them a 3-2 advantage.

Jordana Klein clinched the match for GSU after winning 6-1, 7-5 in the No. 2 singles spot. Klein’s win was quickly followed by freshman Stephanie Woods after she defeated her opponent 6-4, 6-3 in the No. 4 singles spot.

The Eagles wrap up its regular season with Western Carolina University this Friday.