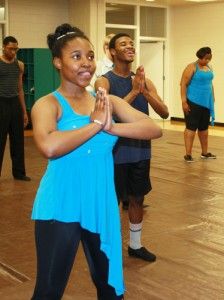 Every Monday and Thursday night the sounds of harmonizing voices find their way to the outside of the multipurpose room in the Recreation Activity Center.

These vocal ensembles come from members of the Academy of Performing Arts Show Choir. APA has been practicing for its end-of-the-year concert “The End… Of the Beginning,” which will be performed tonight at 7 p.m. in the Performing Arts Center.

“At the end of the day we don’t want people to feel like they’re watching the boring parts of ‘Glee’ at our show,” Courtney Escher, co-director of APA and junior multimedia communication major, said.

The concert will feature a diverse selection of songs and dance routines ranging from Broadway to top-40 hit songs.

“We want a variety of people to be able to come to the show and say, ‘Hey, I know that song,’” Shakarra White, co-director of APA and senior health education promotion major, said.

The event will cost $3 for students and $5 for general admission.

The Academy of Performing Arts consists of three groups of performers. The group is a student-led organization consisting of singing and dancing.

“APA started as a spinoff of Adrenaline Show Choir and formed an all-women’s show choir, The Spotlight Jewels.  Now we have an all-male group, The Men in Black, and our dance group, The Triple Threats,” Alison Willis, freshman business management major, said.

The three groups within APA will perform together on multiple songs. The Spotlight Jewels, The Men in Black and The Triple Threats will perform selections of their own choosing at the concert.

“The smaller ensembles pick their own songs and then audition for the directors. Then we pick which ones make it into the show. The small groups help to bring about diversity in the show because everyone has a different taste in music and everyone has something different that they want to perform,” Escher said.

Kyle Perkins, vice president of public relations for APA and freshman psychology major said, “When I come here, it’s a chance to release amplified emotion. If I’m angry, I can sing a part of a song angrily. If I’m sad, I can use that towards the song. No emotion is wasted. It’s not just something that can tear me down anymore.”