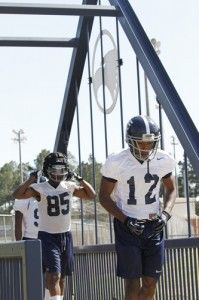 It was the Georgia Southern University football team’s offense (white) versus defense(blue) and the defense prevailed 14-12, with many Eagles out due to injury younger players were forced to step up on both sides of the ball.

It was business s as usual for head football coach Jeff Monken’s triple option offense as they ran for 232 yards and one touchdown on 48 attempts.

However, in this game the offense took a back seat to the defense. Sophomore linebacker Edwin Jackson and junior linebacker Kyle Oehlbeck combined for 18 tackles.

The defensive unit also came up with an interception and one fumble recovery while forcing three three and outs for the Eagle offense.

Junior fullback William Banks scored the lone touchdown for the offense on a five yard run set up by a 22 yard run by freshman quarterback Kevin Ellison.

The Eagles season begins this fall, August 31 against Savannah State University at Paulson Stadium kicking off at 6 p.m.