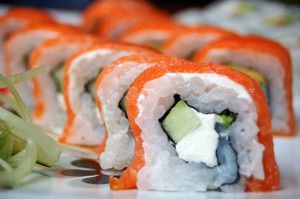 Students will have the opportunity to prepare their own Japanese cuisine during Sushi Night tomorrow at 7 p.m. in the Russell Union Commons.

The first 100 students to show up to the University Programing Board event with their Eagle I.D’s will have the opportunity to learn how to make simple sushi dishes thanks to Tokyo Japanese restaurant, who will provide all the sushi ingredients for free. Students will be able to take home everything they make.

“We sat down as a committee and chose the restaurant with the highest quality sushi and that students would like the most,” Milton Dockins, university programing late night committee chair, said.

“In the past, with only allowing 50 students in, we had to turn large numbers of students away. This year as a committee we decided we wanted to serve as many students as possible. And we were able to do that because Tokyo was willing to work with us wanting to serve a larger number of students,” Dockins said.

“My roommate who’s a member of UPB and loves sushi told me about it. I can’t go because I have to work but I would go if I could. I like the idea of it because it exposes us to other cultures and foods,” Elmo Brackett, an international trade sophomore major, said.

Students seem to be fans of the idea of having hands on experience about cultures different from their own, which is what the UPB aims to do. By giving students entertainment options that also expose them to new cultural experiences outside the classroom.

Devin Jones, a sophomore computer science major, said, “I wish the school would do more stuff like this. A lot of us in Statesboro have probably never even been out of the state. It’s good to be exposed to different things.”