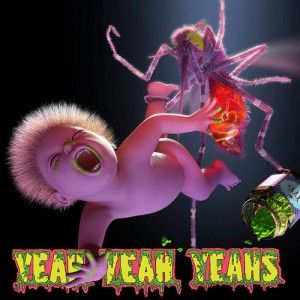 The Yeah Yeah Yeahs have always been as much of an art project as a band, pressing the boundaries of style and sound more than melodies or lyrics.

Its 2003 debut was an immediate indie-punk attack of noise. The 2006’s “Show Your Bones” introduced acoustic guitars and stronger songwriting, followed by 2009’s new-wavy “It’s Blitz!” All are strong albums, and all sound different from one another.

Four years later, the trend continues with “Mosquito,” the band’s weakest album yet. The sound palette this time varies, but mostly sounds like too many sounds and flairs where introduced in the studio. There are plenty of solid songs, sure, but the low points feel lower than the high points are high.

The strongest song is the penultimate track “Despair,” and it’s also one of the mellowest. It moves forward at a rapid pace without ever getting loud, swirling and building. It’s the closest the YYY’s have come to their early hit “Maps.” Singer Karen O softly holds the melody on top of the music, and it works.

The marching band funk rhythm of “Under the Earth” holds together well. The rolling “Slave” brings forth the guitar work that spends the rest of the album – and most of “It’s Blitz!” – drowned beneath other sounds.

The question left up to listeners is if the strong points will make up for a song like “Area 52,” which mixes uncertain, unremarkable music with lyrics about aliens that Spinal Tap would have considered over-the-top.

Karen O’s voice has two modes: the nice, mellow voice displayed on “Despair” and a wailing that occasionally veers into a kicked-dog yelp. The louder mode worked great on the YYY’s earlier, punk-flavored material, but when it’s used on the otherwise solid lead track “Sacrilege,” it feels almost as out of place as the gospel choir that closes the song.

The title track would be good if the lyrics weren’t so literal about the topic “Mosquito.” Yes, there is buzzing. No, there shouldn’t be, but there is.

The Yeah Yeah Yeah’s fourth album in 10 years can be called a good album if you focus on the highlights, but for a band with its pedigree, “Mosquito” is an inconsistent disappointment.