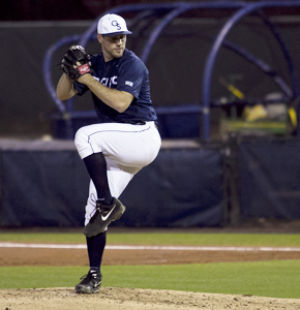 With a 9-3 record against SoCon opponents, GSU sits atop of the conference with the chance to increase its lead over Elon University and its 10-5 conference record. The Mountaineers are tough to beat at home where they are 7-4, but the Eagles are no pushovers on the road with a record of 6-4.

The top of the lineup for GSU is strong, along with Griffin and Davis; junior infielder Ben Morgan and junior outfielder Robbie Dodds are batting above .300 on the season.

This offense can put runs on the board but its decision-making needs to improve, the Eagles’ offense leads the SoCon in strikeouts while the Mountaineers are dead last.

Not allowing this Mountaineer offense to make contact will be tough for the Eagles’ rotation, the Mountaineers, through 24 games played, have only 161 strikeouts as an offense.

Senior infielder Hector Crespo has a .327 batting average in 107 at-bats, and he leads the Mountaineers in hits (35) and runs scored (21).

The game will come down to the team that thrives on the mound. Both teams have stellar rotations and a strong bullpen.

The Mountaineers are better than the Eagles when it comes to ERA, posting a 4.43 ERA in comparison to a 5.01 ERA.