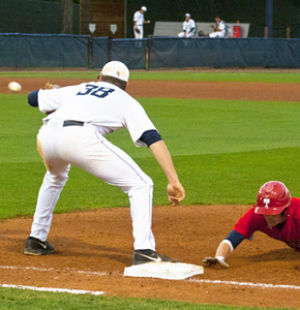 The Eagles (21-14, 10-8 Southern Conference) trumped the Bears (29-10, 10-5 Atlantic Sun Conference) 10-8 in a shootout in Macon in the only other meeting between the two teams. But whereas runs were everywhere against Mercer, the last time GSU squared off against the Owls (19-18, 8-7 A-Sun), the Eagles could not buy a run and were shut out for the first time of the season 5-0.

The Bears have won 15 of their last 21 games since they lost to GSU on March 12, including a 10-1 dismantling of the Georgia Institute of Technology. In that stretch, Mercer has outscored its opponents 162-74. The Bears are hitting a .297 batting average as a team this season, a statistic that would put them in third place in the SoCon in that category. But it is Mercer’s ability to produce runs has led the team to its winning ways of late. Mercer has batted in 274 runs this year. That is enough to rank them above all of the teams in the SoCon and 91 ahead of GSU. What was a high-octane affair in March will surely promise another shootout tonight.

KSU on the other hand has been pretty average since it last played the Eagles. In the 24 games since, the Owls are 12-12 but have lost seven of their last nine.

Common opponents of the Eagles and the Owls include the University of Georgia, Mercer, GT and Jacksonville University. KSU is 3-6 against these common opponents whereas GSU is 6-3. The Owls hold a 3.31 ERA compared the 5.03 ERA of the Eagles. Of course the quality of opponents in the A-Sun versus the SoCon is a mismatch, but GSU still failed to score a single run last time they faced off against the Owls.

These two teams’ paths since last playing GSU, reflect different stories than the outcomes against the Eagles. The Bears are hot since losing to GSU with an offensive prowess to take notice of. Meanwhile KSU has been struggling to hold its head above water since shutting out GSU 5-0 last game.

The Eagles have lost three consecutive SoCon series and were swept this past weekend. They have dropped all the way to sixth in the conference and will head out to North Carolina to face Western Carolina University this weekend. If GSU wants to stay in contention in such a competitive SoCon race, the team needs to create some momentum against these two non-conference opponents at home before hitting the short road trip to play the SoCon-leading Catamounts.