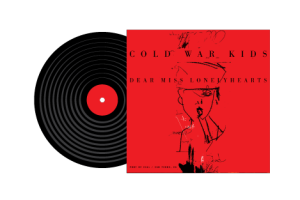 Cold War Kids’ biggest single hit to date is 2007’s “Hang Me Up to Dry,” a simple, sparsely arranged rock song that sounded like it was recorded in someone’s bathroom.

Six years later, they put out a song like “Jailbirds” that sounds ready for a concert hall instead of a run-down bar.

“Dear Miss Lonelyhearts,” the band’s fourth album, manages to mix-n-match genres while still sounding like a Cold War Kids album. This also makes it the group’s strongest album since its 2007 debut.

Cold War Kids is one of the few bands that has the distinction of owning the descriptions of its own sound.

The most distinct part of Cold War Kids’ sound is the wailing voice of singer Nathan Willett, and it is the one consistency through the whole album. Lead track “Miracle Mile” starts off with rapid-fire piano and a snare drum, which lasts about seven seconds before Willett starts singing and a guitar starts punching out chords. Soon enough, Willett is repeating “Come up for air, come up for air.” The result is something like The Killers, but without all the teenage romanticizing.

The driving sound of “Miracle Mile” would be enough for some bands to build an entire album on, but the next two tracks, “Lost That Easy” and “Loner Phase,” both start off with a dark-synth rhythm. Of course, Willett’s wail brings it back to something familiar sounding.

The one downside is how the guitar takes a back seat to pianos and synth-led choruses. Part of this might be due to the addition of new guitarist Dann Gallucci, but it’s not a fatal flaw because guitars were never the centerpiece of Cold War Kids’ music.

Whatever stylistic shifts are experienced when listening to “Dear Miss Lonelyhearts” from beginning to end, the result is a solid album. It’s all anchored by Willett’s soulful singing, and it still sounds like a Cold War Kids album all the way through.