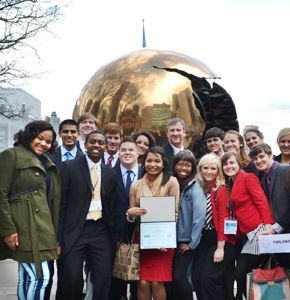 Out of the 10 committees, which form a single delegation, five committees won awards for position papers on topics such as access to education, resource extraction, food scarcity and the North Korean nuclear situation, Barry Balleck, director of Model UN and political science professor, said.

This was the third year in a row that GSU has been ranked Outstanding, Balleck said.

Out of 193 countries represented in the Model UN, only 22 ranked outstanding. Over 3,000 students attended from over 43 countries, Jeffery Thorpe, graduate student in public administration, said.

“People with all different backgrounds and ages are represented. We learn a different skill set and are taught to be more critical than in the classroom,” Thorpe said.

Harmon said students have the ability to learn more about a country by diving deep into the policy and internal affairs of a nation.

“At Georgia Southern, the delegation is composed of undergrad and graduate students, and they must enroll in a model UN course in the spring,” Thorpe said.

“Model UN gives students the opportunity to simulate a country that is not their own and interact with other students who have done the same,” Balleck said.

“We start working in November and then break up into committees where we research non-stop,” Harmon said.

“Model UN is a great learning and growth opportunity. Even if you have little interest in something, go for it. You never know where it will take you,” Shareen Clement, junior sociology major, said.

Model UN has been on campus for more than 40 years and covers a wide array of social and political issues like humanitarian aid, outer space and women’s rights, Thorpe said.

Balleck said, “We live in a world where we are confronted with these issues every day. Students get a hands-on opportunity to understand topics from a broad perspective.”