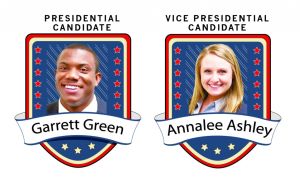 “Students can vote through their WINGS account, and we’re also working on having voting stations in the commons stage Tuesday and Wednesday for students who want to vote that way,” Carrie Cristancho, SGA executive assistant, said.

The voting station will be run by the SGA elections committee, comprised of SGA senators not affiliated with the campaign, Cristancho said.

There are eight colleges that form SGA, and there are five open senator seats that candidates are able to run for in each college.

The competition provided for each college’s senate seats varies from one person running to ten people running.

This will be the second year in a row that the SGA President position has been uncontested.

“I think that competition is healthy, but we’ll just have to go with what we have,” Patrice Jackson, dean of students, said.

SGA needs candidates who will come in ready to work and take SGA to the next level, Jackson said.

“There is an option for someone to not vote for the candidate and vote opposed.  Students really need to listen to what candidates are saying and know their stance before that option though.  If you really don’t agree, then vote opposed,” Cristancho said.

Within SGA, there are eight colleges that represent the colleges of Georgia Southern University and each college has five senate seats to be filled.

SGA will host a debate tonight in the Williams Center Multipurpose room at 7 p.m.

The debate will be comprised of three different sections, including a moderated debate between executive board members, senate candidate introductions and a question and answer period from students, Cristancho said.

Cristancho said, “We’ve been keeping everything under wraps to keep everything fair, and we’re going to let everyone know at one time before the debate starts.”