Eagles strive to get back on top 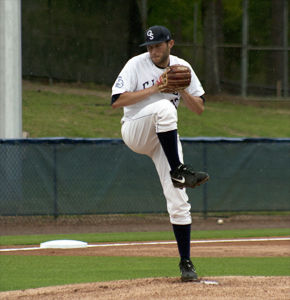 The Georgia Southern University baseball team, now ranked sixth in the Southern Conference, will look to take down Western Carolina University, which holds the No. 1 spot, this weekend.

GSU’s bats have been struggling as of late. The team managed only two runs against the Bulldogs through three games. The Eagles were held scoreless in that series until the seventh inning of the final game.

If GSU wants to compete with the Catamounts, the Eagles will have to get their bats going.

Throughout their recent struggles, the Eagles have dropped to 10th in the SoCon in team batting average with an average of .264.

As a team, GSU ranks in the bottom five in hits, runs scored, runs batted in and home runs. GSU is 14-0 this season when recording as many hits or more than their opponent and 16-2 when scoring six or more runs.

GSU Sophomore pitcher Sam Howard (5-4) has lost his last two starts, and with those losses his ERA has risen to 5.77, the second highest total on the team. Howard sported an ERA below 5.00 before his last two outings and will need to get back to that in order for the Eagles to get back on top.

The bullpen for the Eagles is strong lead by senior pitchers Kyle Rowe (3-1) and Justin Hess (3-3) who have combined for 73 strikeouts and five saves.

First pitch is set for at 5 p.m. tomorrow, 4 p.m. on Saturday and 1 p.m. on Sunday with the Eagles looking to reclaim their number one ranking in the SoCon.