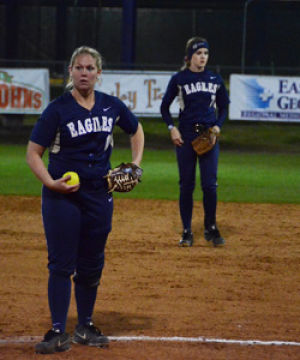 GSU pounced on Mercer early with a four run first inning.  Junior designated player Shelby Morrill put the Eagles on the board with a two RBI single to right field.

Senior third baseman Andrea Tarashuk drove a RBI single of her to right field pushing the score to 3-0, and for the first time in three games a wild pitch worked in the Eagles favor.

Morrill crossed the plate on the wild pitch and GSU held on for the 4-0 win.

Game two would turn out to be a back and forth nail biter with GSU striking first.  The Eagles five run third inning was highlighted by a three run blast deep over the right field fence by Morrill.

GSU looked poised to put another easy victory in the bank until MU junior shortstop Krista Kennedy hit a solo homer in the top of the fifth inning.

The damage was minimal but the momentum had shifted and MU would stun the home fans at Eagle Field with four runs in the top of the sixth inning making the score 5-5.

Sophomore pitcher Brooke Red pitched a total of 11 innings in the two games, but she watched from the dugout as sophomore second baseman Lexi Allen stepped to the plate.

Allen lined up the pitch and sent a double to left centerfield for a walk off win.  The 7-6 victory improved the Eagles record to 18-20 this season.