Men walk a mile in her shoes, literally 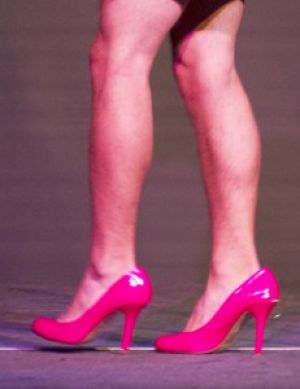 It’s harder than it looks.

Wearing heels around campus can be a struggle, for both women and men, but today the boys are strutting what they’ve got in a pair of heels to raise awareness for sexual violence.

This is the first event like this for Georgia Southern University’s campus. The event aims to change men’s perspectives by helping them better understand victim’s experiences in hopes of reducing the potential for violence.

“The event shows there’s no line between being male and female, there’s just being and existing as a person,” Gerrard Davis, a participant in the event and senior philosophy and writing and linguistics major, said.

All proceeds from the event will go to the Statesboro Regional Sexual Assault Center. The walk will take place today at the Russell Union Rotunda. Registration will begin at 2:30 p.m., and the walk will start at 3:30 p.m. Anyone who donates at least $5 will receive a t-shirt.

“One of the reasons I got involved in it was because, not only as a male, but as a student at Georgia Southern I felt there weren’t enough activities that pushed feminism in a positive light,” Davis said.

The SRSAC provides services to survivors who come forward about their assault whether it has happened recently or in the past.  These services include providing emotional support, help through police interviews and help through the judicial system and are completely free of charge, Christie Perry, SRSAC executive director, said.

“Without donations from the community, we would not be able to function because we rely so heavily on community support,” Perry said.

Shanna Felix, president of Sexual Assault Student Educators said, “The reason this event is so important is because so often when you start talking about issues like this people start to think that men are the problem, and what’s so awesome about Walk a Mile in Her Shoes is that we have almost one hundred registered men coming forward and saying we care about these issues too.”