Greeks pair up to â€˜Smoke-Outâ€™ cancer 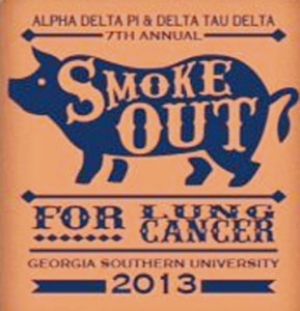 Delta Tau Delta and Alpha Delta Pi will be hosting the 7th Annual Smoke-Out for Lung Cancer this Saturday from 1– 4 p.m. in the Hanner Fieldhouse parking lot.

“All the proceeds are going toward lung cancer awareness and to help fight against lung cancer,” Michael Samiratedu, brother of DTD, said.

Students can buy plates for $5 from DTD and ADPi members before the event or the day of the event at Hanner Fieldhouse parking lot. The plates will have pork, potato salad and baked beans as well as a choice of water, tea or lemonade, Samiratedu said.

ADPi decided to host the event with DTD because the members felt strongly enough about the severity of lung cancer to raise awareness about it through the cookout, Annalee Ashley, ADPi sister, said.

“Lung cancer affects a lot of people and I feel like sometimes it’s overlooked.  It just effects so many people that, even though it’s neither of our philanthropies, we felt strongly enough to do something about it,” Ashley said.

111 South and Tan-Tastic will be sponsoring the event, and companies from Statesboro have donated items to be raffled, Samiratedu said.

Raffle tickets can be bought at the event for $1 for the chance to win multiple prizes including a 65 quart YETI Cooler from Anderson’s General Store, two $20 gift cards from Millhouse Steak House, shirts from the Sir Shop and a signed baseball by the Georgia Southern University baseball team.

Paul Tenzel, a DTD brother, in honor of his father, started the event seven years ago.

Samiratedu said, “One of Delt’s alumni’s, Paul Tenzel, his father, Jack Tenzel, was a physician here in town and he passed away, and Paul started this in his honor and in memory of him.”