For the first time since 2006, GSU goes without concert 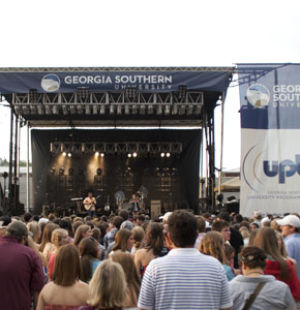 Georgia Southern University students will not see a big-name musical act in concert this semester.

The university along with University Programming Board has hosted a concert, either in the fall or spring semester, every academic year since 2007.

There was no fall concert this academic year because there were no artists touring in the area who would fit into the budget allotted for the concert, Teresa Thompson, vice president for Student Affairs and Enrollment, said.

“It just wasn’t feasible to have the concert this year,” University Programming Board President Brittany Bullock said.

In 2010 the University developed a biannual schedule for spring concerts. During the off years, the portion of student fees set aside for the concert are saved to supplement the costs of the following year’s concert and to keep the cost of student tickets low, Thompson said.

“In the years where we don’t have a concert, the money budgeted for the concert is saved,” Thompson said. “The Band Perry and The Fray cost $250,000 a piece. We wouldn’t be able to pay that $500,000, plus the costs of lighting and sound equipment and rain insurance without saving money in the off year.”

In recent years, GSU has hosted many well-known artists in the fall including Ludacris and O.A.R.

Fall concerts come about by chance. If there is an affordable artist looking for a place to play at the time, GSU will negotiate terms with them, Thompson said.

“There’s been no ground work as far as finding an artist for next fall yet. It’s really up to the programming board to figure out what they want to do. If they want to do a bigger act in the spring, then that’s one option, or maybe bring a smaller act in the fall. They’re always looking at the possibility of a homecoming concert as well,” Assistant Director of the Office of Student Activities Justin Jeffery said.

UPB is responsible for student entertainment events, including bringing musical acts to campus and organizing concerts. The decision to not have a spring concert was made in January when the spring calendar was organized.

Jeffery said, “At the end of the day it’s completely student-led and student-run, so we want to make sure that we’re bringing the artists that make the most sense for the student population.”