Your future grades may change 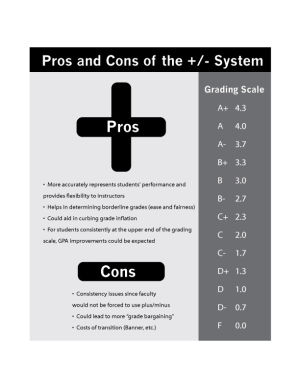 Georgia Southern University Faculty Senate is considering the option of moving the current grading scale to the plus/minus system of grading.

The current letter-grading system has the traditional letters of A, B, C, D and F which add up to value points 4, 3, 2, 1 and 0 respectively. This system will add a plus and minus to the letter grade, thus increasing or decreasing the quality points assigned to that grade.

According to a preliminary report by the Plus/Minus Subcommittee, a benefit of the plus/ minus system is that it more accurately represents students’ performances.

Dr. Jean Bartels, provost and vice president for academic affairs, said that the plus/minus system would be beneficial for students to see where they actually stand in the class.

“It would help to distinguish a little bit, the character of the grade,” Bartels said.

The grading system will be more beneficial to students than to faculty, Dr. Mohammed Abid Shaikh, professor of chemistry, said.

“I think it’s fair instead of giving nothing in between,” Shaikh said.

The grading system, however, will have its disadvantages.

For faculty, consistency issues in grading can arrive because faculty would not be forced to use the plus/minus system, according to the preliminary report.

“It starts creating categories of students that will have an impact in terms on how we look at a student’s real grade point average,” Bartels said.

“You are looking at how you compare to various students around you. I don’t think that is a good way for anyone to approach their education,” Bartels said.

Faculty senate has a task force that is exploring the concept by interviewing a number of students and faculty before considering a motion to change the current grading scale.

“We were asked by the Senate Executive Committee if we would just look at the possibility of such a system at Georgia Southern,” Yarbrough said.

The background research done by the committee was on the grading systems of aspirational and peer institutions, not only in Georgia, but around the country, Yarbrough said.

For example, a peer institution such as Ga. State has the opportunity for a grade of A+, however that is a bit of an inconsistency, Yarbrough said.

“Even if hypothetically this were to change it would, by definition, include the current system. That is, you would still have a grade of A, B, C, D and F,” Yarbrough said.

Yarbrough said that faculty would not be required to use the plus/minus system.

“You have to keep in mind that faculty have some flexibility with grades in the first place,” Yarbrough said.

However, when exactly the system may be in place is still in speculation.

Shaikh said, “I have no idea when they will be doing it. Is it going to happen this year or not?”

Arielle Coambes contributed to this report.