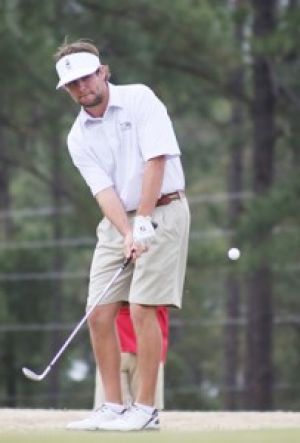 The Georgia Southern University golf team was unable to produce a major day three comeback this week at the Gary Koch Invitational and finished tenth out of 15 teams in Tampa, Fla.

Day two proved to be too much for the Eagles, who couldn’t get ahead of the field. Junior Will Evans and sophomore Scott Wolfes both lead the team with a 147, but with tough company at the invitational, the Eagles were too far out of contention for a spot in the top three.

Even after not performing up to expectations, head coach Larry Mays recognized his team’s ability to play through adversity and mount comeback for day three.

“We got three solid rounds today but just didn’t get a fourth,” Mays said in a news release. “The conditions were harder with the wind, and the course played tough.”

Instead of a comeback, the Eagles battled more than a scoring deficit. Sixteen mile-per-hour winds and a tough course added to the struggle of pulling themselves out of a tenth place hole.

Wolfes ended the day with a team best score of 72, but his 23rd place overall finish did little to diminish the gap between the Eagles and 1st place Florida State University.

This is the worst finish for the Eagles this spring, and it couldn’t have come at a worse time for the team. The Koch Invitational marks the end of the regular season for the Eagles, and all attention goes towards the Southern Conference Championship. Mays hopes his team can learn from this week.

“Hopefully, we can use this as a little wake-up call heading into the SoCon Championships,” Mays said in a news release.

With the SoCon Championships less than two weeks away, the Eagles will hope to put this tournament behind them and fire on all cylinders for the championship on their home course of Forrest Heights in Statesboro.