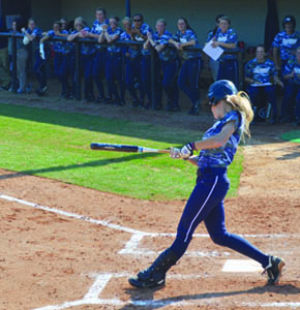 The Georgia Southern University softball team had a chance to move up in the Southern Conference standings, but it could not capitalize on the opportunity after a 1-2 weekend against SoCon rival Furman University.

The three-game series started off promising for GSU as the team returned from a rough road trip to beat Furman 6-0 on Friday.

“We have actually the nineteenth hardest schedule in the country right now as far as strength of schedule, and what it does as you can see is it prepares us for conference.  So if we want to be the best we’ve got to play the best,” head coach Annie Smith said.

Morrill, who leads the team with a .352 batting average, went 2-4 with a double and a RBI. Purvis allowed just one hit in her complete game shutout and struck out four batters.

A three-run lead heading into the seventh inning had game one of the double header on Saturday looking like the 10th straight win over Furman for GSU.

Junior pitcher Allie Miles had her fourth win of the season in her sights, but a four-run explosion from Furman in the top of the seventh quickly dashed those hopes.

With the score 4-2 GSU was still in control, but a second wild pitch from Miles followed by an RBI double from Furman junior first baseman Stephanie Spain tied the game at 4-4.

Smith brought on sophomore pitcher Brooke Red in relief but a wild pitch from her allowed Spain to move to third and score the go-ahead run on a sacrifice fly.

“We don’t win and lose because of one person.  It’s never one person so it’s not one thing.  We just got to keep working on everything, we got to drive in more runs, and you know keep people off base,” Smith said.

Smith’s words rang true in game two of the double header as the Eagles found themselves in a bases-loaded jam in the top of the eighth inning.

Purvis came on in relief to work out of the tight spot but she hit two batters making the final score 3-2.  The loss left the Eagles with an overall record of 16-20, but a SoCon record of 5-3.

Heading into a two-game set with Mercer University tomorrow starting at 3:00 p.m. Smith said, “We just take it one game at a time. That’s all we can do.”