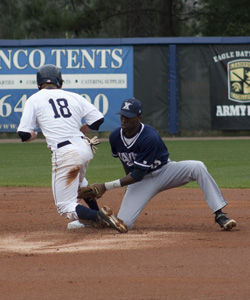 An unusually quiet offensive night for the Georgia Southern University baseball team resulted in a 5-0 loss to Kennesaw State University and its first shut out this year.

The Eagles (6-6, 0-0 Southern Conference) only strung together six hits on Wednesday and rarely threatened to move runners into scoring position.

A leading reason for such an ineffective day at the plate for GSU was the Owls’ (7-6, 0-0 Atlantic Sun Conference) dominating performance on the mound. Four separate KSU pitchers successfully fanned 11 GSU batters and only walked two the entire game. The Owls were simply too good on the mound for GSU.

The only time in the game that the Eagles sent a runner home was on a wild pitch from KSU. Sophomore infielder Tyler Avera got on base with a leadoff double and would be moved over to third base a few pitches later. A wild pitch sent Avera in a dash for home but he was called out on the play at the plate.

Senior starter Josh Stevenson (0-1) was pulled after only 2.1 innings of work on the mound. He allowed four runs, although only one of which was earned, on six hits and two walks.

GSU was off to a typical mundane first inning with two outs when freshman shortstop Cole Watson committed his third error on the season. After the miscue, three unearned runs crossed the plate.

Senior pitcher Drew Johnson came on in relief of Stevenson and kept things at an even keel during his career-high 4.2 innings thrown. Johnson did not allow a run and struck out three batters on the afternoon.

The Eagles are back in action at home this weekend and will begin SoCon play as the Wofford College Terriers roll into town.