A funny way of getting on base 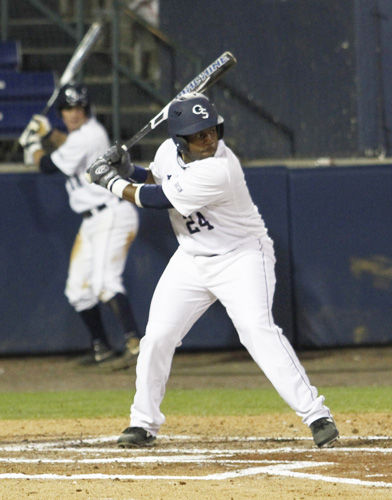 Photo By: Chad KenneySenior outfielder Scooter Williams (24) gets set for a pitch against Xavier University. Williams currently leads the team in HBPs with 10.

Outfielder Scooter Williams gets on base a lot for the Georgia Southern University baseball team but he sure has a funny, painful way of doing it.

Although Williams leads the Eagles in on-base percentage at .471 he also leads them in getting hit by pitches with 10 through 15 games, including being hit twice in the last game.

“The last one, it really hurt. Usually I’ll be able to shake it off but that one kinda hurt,” Williams said after Sunday’s game. “It’s not fun getting hit.”

No one on the team has more than three HBPs for the Eagles, and if you tripled that Williams would still be leading the team

Williams also leads the Southern Conference with his 10 HBPs he has four more than any other player in the SoCon.

“That’s my job as a leadoff just to get on base at any time, whether it’s a hit, a walk or hit by pitch,” Williams said.

When he gets on base, Williams is an excellent thief going 8-8 in stolen base attempts. He has the second highest number of stolen bases on the team.

Williams is second in runs scored for the Eagles with 16, and he also has the fifth-highest batting average on the team at .302.