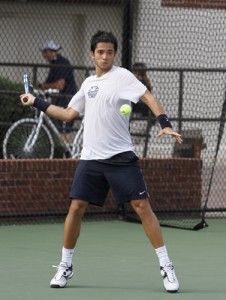 The Georgia Southern University men’s tennis team played Wofford College and Bethune-Cookman University this weekend and did not skip a beat against either program.

The first matchup was on Saturday against Wofford. The day started off with doubles play, which the Eagles won easily. Sophomores Kyle Hoffman and Andrew Dromsky won their match 8-3, senior Matthijs Verdam and junior Oliver Webb won 9-7 and junior Marco Osorio and freshman Rayane Djouad also won 9-7. This kick started the Eagles to a 1-0 lead.

Dromsky was the first Eagle to complete his singles match as he defeated Wofford’s Drew Superstein, and Webb wasn’t too far behind defeating Wofford’s Graham Duncan. Djouad won his match against Wofford’s Walker Heffron, putting the Eagles up 4-1 and clinching the victory. Osorio and sophomore Albert Codina finished off the Terriers and raised the final score to 6-1.

“The last two years Wofford’s gotten us in the regular season, so to not only come out and beat them, but it was a pretty comprehensive win,” Eagles head coach Nick Zieziula said. “The big thing we have been talking about is being mentally tough and continuing with our habits in between points, and I think we did a much better job of that today than we have in the past.”

Sunday’s match against Bethune-Cookman went even smoother for Ziezula’s Eagles. GSU started off the match by sweeping B-CU in doubles play. Osorio and Djouad finished the first and most decisive doubles match by dominating B-CU’s juniors Seve Day and Juan Varon, 8-0. The Eagles’ double-clinching win came from Dromsky and Hoffman by a score of 8-3.

In singles play the match was clinched with a 6-2,6-2 victory for Webb. Redshirt freshman Carson Jones and freshman Rafael Racy won the first two singles matches to put the eagles up 3-0.

This win ended a three-game home stand for the Eagles, and next they will go on the road to Atlanta to take on the University of Louisiana-Lafayette, which is coming off a 4-1 victory over the University of Texas at San Antonio.