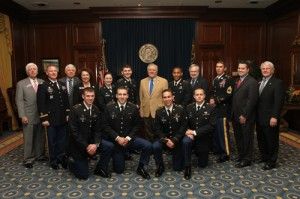 According to the ROTC website, The Ranger Challenge is a collection of 10 physical and mental tasks that are meant to test a variety of skills, such as weapons assembly and a ropes course.

Two faculty members from GSU were in attendance: President Brooks Keel and Russell Keen from the University’s Office of Government Relations and Community Engagement, according to a news release.

Also in attendance were Sen. Jack Hill and three members of the House of Representatives.

It was an honor to recognize the ROTC cadets for the win, Lt. Gov. Casey Cagle, a former GSU alumnus, said in the news release.

“The key to Eagle Battalion’s success, like anything in the Army, is about attracting quality people who want to the right thing and do it well, ” according to the ROTC Ranger Challenge website.

The Eagle Battalion will compete in the International Sandhurst Competition at the U.S. Military Academy in April, according to the news release.

The National Sandhurst competition is a two-day event that takes place at the U.S Military Academy in West Point, NY on Friday April 19 and Saturday April 20.

Lindsay said, “ROTC is a great program to promote the leaders of tomorrow.”