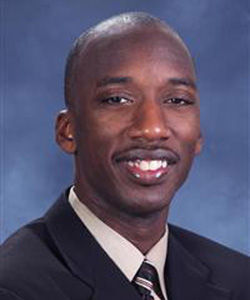 The dismissed men’s basketball head coach Charlton Young still has three years and a half million dollars remaining on his contract at Georgia Southern University.

Young has a yearly salary of $174,999.96, according to open.ga.gov. That adds up $524,999.88 for the three years left on Young’s contract. Athletic Director Tom Kleinlein declined to discuss the agreement of Young’s severance package.

“Charlton has a financial agreement that will guarantee his salary for three years beyond where he is at right now. Other than that, his arrangements that I have with him will be between myself and his representative, but there is an arrangement out there,” Kleinlein said.

Kleinlein wants a change in direction for the men’s basketball program, so he went public with the decision to remove Young during a news conference Tuesday.

The Eagles just finished their season Saturday at the Southern Conference Tournament with a 14-19 record overall and a 7-11 league record. GSU won a SoCon Tournament game for the second consecutive year, defeating Wofford College 60-44 in the first round before falling to the No. 1 seed Davidson College in the quarterfinals.

Kleinlein is searching for a coach to come in and embrace the opportunity of becoming the CEO of the basketball program.

“At this time I will announce the fact that we are starting a national search for our basketball program,” Kleinlein said Tuesday.  “We have not entered into any kind of agreement with a search firm at this time. I will make that decision in upcoming days.”

“Somebody has to come in here and take us to the next level in terms of everything that we do, in terms of our basketball performance on the court socially and grow our program,” Kleinlein said.

The GSU alum became the 12th head coach of the Eagles’ basketball team in the 2009-2010 season and the third alum to guide the program.

“Charlton Young represents Georgia Southern with the utmost character. He has done a tremendous job of taking a program that had trouble when he arrived and getting it to a level of respectability,” Kleinlein said.

With the student vote last semester supporting a fee to move up to the Football Bowl Subdivision level, it is important to Kleinlein to get every sport at the top of whatever conference GSU is in.

Before his coaching career, Young sported the number 12 for the Eagles from 1989 to 1993 and started in 97 games at point guard averaging 14.8 points and 4.9 assists per game. He graduated as the school’s career leader in assists (570) and scored a 1,517 career points which ranks eighth on GSU’s all-time list. In September of 2008, Young was honored by GSU when he was inducted into the Georgia Southern University Athletics Hall of Fame.