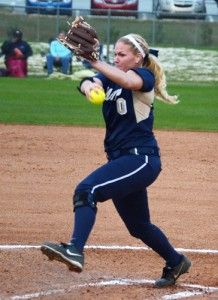 Photo By: Lindsay HartmannJunior pitcher Sarah Purvis winds up and throws a pitch.

The team stumbled out of the box in the FSU Tournament with shutout losses to the University of Minnesota and Florida State University.

UM surprised GSU with a first inning solo home run off junior pitcher Allie Miles. Junior shortstop Kourtny Thomas had the only hit for GSU, as the ladies could not gain the momentum after three early runs from UM.

The Eagles followed up the 5-0 loss to UM with a disappointing 4-0 loss to FSU.

In that game junior pitcher Sarah Purvis walked six batters and the three hits the offense mustered in support failed to drive home a run.

FSU redshirt senior Monica Perry stifled the Eagles and her 13 strikeouts to go with zero walks.

Day two of the FSU Tournament bought two more losses for the Eagles as the offense found no rhythm at the plate.

GSU would score one run against eventual tournament champion UM and three against FSU to bring its grand total to four for the weekend.

The Eagles suffered a 7-1 loss to UM thanks to some early offense for the second straight day.  FSU used the same formula to end the tournament for GSU on a 12-3 note.

The Eagles traveled to Baton Rouge, La. in the midst of a four-game losing streak for a two-game set against Louisiana State University.

In game one LSU roughed up Purvis putting together a five-run second inning on the strength of two home runs from freshman short stop Bianka Bell.

GSU found itself blanked on the score board for the third time in five games with the 8-0 loss.

With the possibility of a six-game losing streak staring them in the face the Eagles went into the third inning of game two tied 2-2.

That is when Bell did it to GSU again with a RBI double to left centerfield.  Her hit put LSU up 3-2 and the Eagles would not overcome the one run deficit.

Coming off a sixth straight loss GSU was ready to resume Southern Conference play against the College of Charleston Cougars.

The Eagles were undefeated in the Southern Conference this season and pitching on her 21st birthday Purvis kept the streak alive.  She pitched nine innings of one run ball to give GSU its first and only win over spring break.

The Eagles would see their conference-undefeated streak come to an end the same day as CofC sweated out a 4-3 victory.  The rubber match was rained out bringing the tough week to a merciful end for GSU.

Now the Eagles have to get prepared for a hostile crowd in Athens as the team battles the University of Georgia tomorrow at 6:00 p.m.