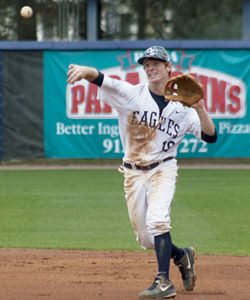 The University of North Carolina at Greensboro managed to out-hit the Georgia Southern University baseball team as they won the game 10-6, taking the weekend series 2-1.

Josh Stevenson recorded the loss, his second of the season after allowing six runs and nine hits.

The two teams were close in hits with 14 for the Spartans and 10 for GSU but the Spartans were able to cross the plate at a higher rate.

Despite the series loss, GSU still sits atop the Southern Conference with a record of 9-3 (18-9 overall).

GSU will look to stop their two-game skid when they travel to play Jacksonville University on Tuesday beginning at 6 p.m.