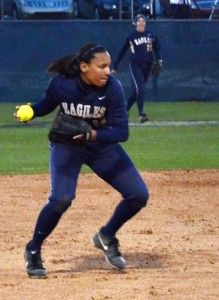 Georgia Southern University’s softball team (15-17) will continue its road trip after going 1-8 over spring break to play against the University of Georgia (25-7).

Behind the plate, the Eagles have several strong players that have performed well this season, such as junior infielder Kourtny Thomas who has 21 hits, 14 runs, 14 RBI’s and seven home runs. Also, senior infielder Tabby Douberley has recorded 30 hits, 12 runs, 22 RBI’s and four home runs.

When comparing the team’s pitching, GSU has posted more strikeouts, but UGA has allowed fewer runs. Senior pitcher Sarah Purvis has totaled 120 strikeouts for the Eagles this season, but Glasco for the Bulldogs has only allowed 32 runs this season.

To end GSU’s road swing, the Eagles will return home this weekend to play against Furman University on Friday at 4 p.m. and on Saturday at 11 a.m. and 1 p.m.