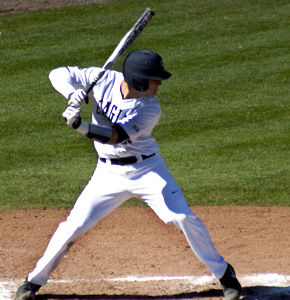 Two errors in a row by Jacksonville University allowed two Eagle runs, sending No. 22 Georgia Southern University to its seventh straight win by a score of 11-4.

The Eagles (17-7, 8-1 Southern Conference) only led 4-2 going into the bottom of the fourth inning when the Dolphins’ (9-16, 2-1 Atlantic Sun Conference) third baseman booted a ball with two outs that let up a run. The following play, a dribbler was sent right back to the pitcher only to keep on rolling right through his legs allowing yet another run. GSU extended its lead to 6-2 and would not show another sign of letting JU back into the ball game.

Sophomore infielder Tyler Avera and junior outfielder Stryker Brown made the most noise at the plate on Tuesday.

Brown, who has only started about half of the time so far this season, has been making a case for himself in the past few games. A righty in the field but a lefty in the box, Brown has now reached safely in 12 of his past 15 plate appearances and finished going 4 for 6 with three RBI and two runs scored against JU.

Avera finished the game going 3 for 5 with two RBI and two runs scored. He has only started about half of the Eagles’ games this year as well and held a .195 batting average coming into the contest.

Junior pitcher Matt McCall (3-0), a transfer from Mercer University, earned his third win on the year. McCall struck out seven in his four innings of work.

GSU forced JU to change pitchers five times throughout the game and knocked them around for 11 hits.

The Eagles will put a seven game win streak on the line as the team travels to the University of North Carolina at Greensboro for a three-game SoCon series this weekend.