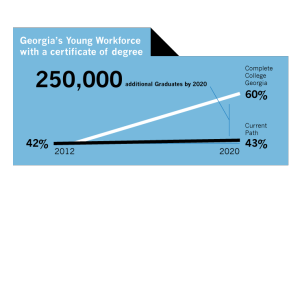 The plan, which was put in place to create continuity between schools, allows students to transfer credits from SSU and continue on the pathway to receive a master’s degree or doctorate at GSU.

“The system was impressed with how Georgia Southern worked with other institutions to find those kinds of pathways that would be beneficial to the student while obviously not compromising the education,” Bartels said.

In an effort to raise the graduation rates of the schools within the University System of Georgia and the Technical College System, Gov. Nathan Deal asked for degree input and data. One of GSU’s main focuses will be on the retention rate of second-year students.

“Numerous studies show that in the future, jobs will require advanced skill levels and (Complete College Georgia) is a credible program in light of the economic needs,” Benjy Thompson, CEO of Development Authority of Bulloch County and committee member, said.

The summit had two focal points, each represented by members on GSU’s committee, economic development and pre-college education, Bartels said.

“It’s critically important that we have people at the table who have those perspectives to show. There is no downside to this. We need to see and hear the voices of the people that our work affects,” Bartels said.

“One goal of Complete College Georgia is to place emphasis on the mechanisms in place for workforce development,” Chad Harmon, Student Government Association vice president of Academic Affairs, said.

“It used to be that the formula was based on how many students were enrolled. We counted heads. It’s going to change to, in part, look at our outcomes,” Bartels said.

CCG is a statewide initiative by Gov. Deal, in accordance of Complete College America, to balance the number of jobs available with the number of individuals who had the qualifications, Bartels said.

It is imperative that universities create not just degrees, but useful degrees, Thompson said.

Gov. Deal asked the University System of Georgia, as well as the Technical System, to work to increase the number of people who had certificates, associate degrees or bachelor degrees in areas where there was potential for careers in the future.

“Complete College Georgia is completely in effect right now, the concept of goals, and that we are working to those goals. We are making this happen, ” Bartels said.

GSU has set up a team that touches every part of the institution to create goals that the university can achieve, Bartels said.

“One simple example is first-year experience. We do a lot to acclimate students into higher academia, to get them better prepared in how they manage activities and the work they do at a higher university level,” Bartels said.

The current focus is on sophomores and support programs that may help them be more successful in the classroom, Bartels said.

“We need to figure out ways to help support faculty so that they can be even more helpful to students and giving them the resources they need to succeed,” Bartels said.

“You can’t argue with a plan that raises graduation rates,” Harmon said.

Bartels said, “Our intent is really to do two things, help students to be successful and work with faculty to create an environment where students can be successful.”