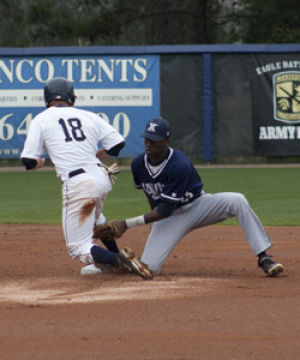 Howard has been the Eagles’ (7-6, 1-0 Southern Conference) most consistent pitcher this season and continued his effectiveness on the mound as GSU won 7-2 against the Terriers (7-7, 0-1 SoCon). The lefty struck out eight batters and only allowed one earned run en route to the team’s first SoCon victory.

Backing up the stellar performance from Howard was junior infielders Ben Morgan and Brent Pugh. Morgan, who has arguably been GSU’s best offensive performer this season, went 4 for 5 with three RBI and a stolen base. Pugh was 1 for 2 with two RBI and two walks.

Wofford struck first in the game with a one-run first inning which the Eagles matched in its half of the inning. With the score being 1-1 and the bases loaded in the second inning, Pugh sent a single through the left side for two runs and the early lead. Two batters later Morgan hit an RBI single pushing the score to 4-1. After getting knocked down in the second, the Terriers never managed to get back up.

Freshman pitcher Evan Challenger came on to close the game in the ninth inning for GSU. Challenger proved to be as effective in his one inning as Howard was during his eight. The freshman struck out the first two batters he faced before inducing an infield pop fly to end the game.

The second game of this series is set to begin at 2:30 today at J.I. Clements Stadium.