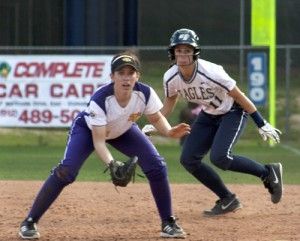 With six total runs in the third and fourth inning, the Georgia Southern University softball team put it on the Furman University Paladins 6-0.

Morrill hit a RBI double to left center field to put the Eagles on the board in the bottom of the third inning, but her teammate Tarashuk wanted in on the action as well.

She followed the double by Morrill with a two out single right back up the middle to push the score to 2-0.

A bases loaded single in the bottom of the next inning combined with a one hit shutout performance from junior pitcher Sarah Purvis helped GSU get a 6-0 victory at Eagle Field.

The Eagles will try to add to their Southern Conference lead tomorrow at 11:00 a.m. in game one of a double header with Furman.