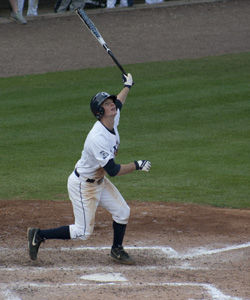 Richman retired eight batters and allowed only five hits before being taken out in the ninth inning.

A play at the plate in the ninth inning saved the game for the Eagles.

Senior outfielder Scooter Williams made the throw and sophomore catcher Chase Griffin tagged the runner at home plate to record the out that would have tied the game.

GSU will look to complete its second sweep of the season after the first pitch is thrown tomorrow at 1 p.m.