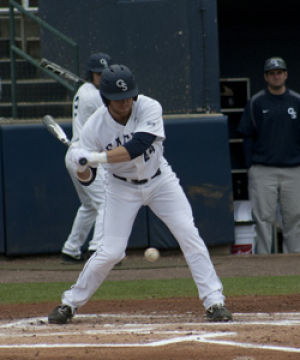 In tomorrow’s rescheduled matchup with Kennesaw State University, the Georgia Southern University baseball team will have to put the bat on the ball against stellar pitching by the Owls and their deep rotation.

In the last 10 out of 11 games this season the Eagles has been successful in scoring at least one run in the first inning, proving to be a powerhouse offense.

The Owls are a tough team, although they are currently on a three-game losing streak, sporting a 6-6 record overall including a win against the University of Georgia in a one-game matchup.

Both sides have an advantage. Offensively the Eagles excel, led by senior first basemen T.D. Davis who is batting an impressive .409 with three homeruns and 17 RBI.

Junior outfielder Bo Way leads the Owls with 16 hits, one homerun and a batting average of .348.

Comparing run totals, the Eagles’ offense is light years ahead of the Owls with 76 runs scored in 11 games, compared to 46 runs scored through 12 games for Kennesaw State.

With one less game, the Eagles have 15 more hits than the Owls so far on the season.

The Owls can rely on their pitching to be the catalyst defensively against GSU. Freshman pitcher Jordan Hillyer and sophomore pitcher Colton Cross have given up a combined five runs with 17 innings pitched between them.

Other than Hillyer the rest of the rotation for the Owls post ERAs over 3.00 with a team average of 3.34.

The Eagles team ERA is 6.35, which is far worse than the average of the Owls.

Both sides have an equal opportunity to get a win on Wednesday. If the Eagles’ bats remain hot they can win, and if the Owls’ pitching is strong they can win.