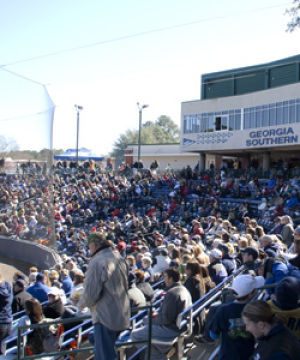 Sunday’s baseball game at J.I. Clements Stadium is designated Athletic Training Appreciation Day to honor all of the athletic training staff and students as well as those in the community.

Although fans usually only see the athletic trainers when a player gets hurt on the field, there is much more to the profession than simply responding to injuries on the field.

“Trainers coordinate all the doctor’s visits of the athletes,” senior athletic training student Marcus Underwood said. “We also do the majority of the athletes rehabilitation from injuries they may sustain in games or practice.”

Athletic trainers are paid employees. Athletic training students are Georgia Southern University students that must log a certain number of hours per week and semester in order to graduate in that major.

“Trainers will, on a daily basis, do rehabs for the athletes. With orthopedic injuries we will pretty much do all of that rehab just like a physical therapist would for the general population,” Underwood said.

GSU’s Director of Sports Medicine Brandy Clouse will be throwing out the first pitch for Sunday’s game that is set for 1:30 p.m.

In addition to being invited to the game on Sunday, athletic trainers from the area were also invited to attend a teaching demo for emergency situations on Tuesday night.

“There’s a human simulator that is able to simulate different emergency scenarios that will be at the demo,” Underwood said.