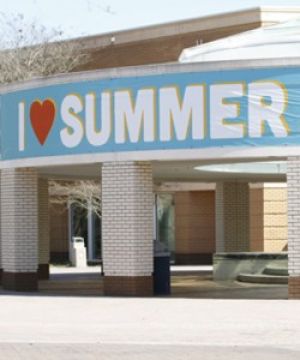 According to the Faculty Senate Meeting minutes from Feb. 20, summer enrollment is down about 800 students compared to the same time last year.

The decrease in enrollment will cost the university approximately $2.5 million in revenue.

“A decline in enrollment will not only negatively impact the university financially, but it will also limit the number of classes that we can offer during the summer term,” according to a message from President Keel on March 8. “Additionally, it negatively impacts employment and also our overall economic impact on the region.”

According to the minutes, part of that decline is due to the limited access to the Pell Grant during the summer.

“For the entire history of the Pell Grant, it was always a fall, spring award, unless the student did not attend full time either fall or spring or both. Then there would be some money left over for the summer,” Ellen Seel, assistant director of financial aid, said.

Another factor of enrollment being down is most likely for economic reasons such as finding a summer job, Paul Michaud, associate vice president of the department of human resource, said.

“One of the ways that we have identified to help boost summer enrollment is by offering summer jobs for our students,” Keel said in the email. “We believe that ability to work to help pay for their summer classes will help improve our current enrollment numbers.”

A message sent by GSU through the MyGeorgiaSouthern page states that students who have enrolled in summer classes are allowed to take part in a summer job fair.

The job fair will take place on Tuesday, March 26 from 9 – 12 p.m. in the Russell Union Ballroom.

This event is solely designed for on-campus departments to conduct their hiring for the summer and will allow them to start hiring students for the fall semester if they wish, Demetrius Bynes, assistant director of employment services, said.

“They have the opportunity to meet students who are seeking summer and fall employment,” Bynes said.

When coming to the job fair, Michaud recommends that students come professionally dressed, prepared to be interviewed and with multiple resumes in hand.

At the job fair, students will be interviewed on the spot and will have no need of filling out job applications at that time.

“The goal is to get the job, and we will deal with the bureaucratic paperwork after,” Michaud said.

Seel said the government did not fund summer Pell Grants in the summer of 2012 and will not fund for 2013. There is no indication that they will ever have an extra fund for the grant ever again.