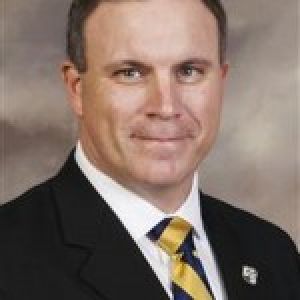 Yesterday, Athletic Director Tom Kleinlein outlined five objectives for his department that include athletic and academic distinction as well as progression for the university in the new “Exceeding Expectations” plan.

The strategic plan was developed after feedback and input from varying members of GSU’s faculty, Athletic Department staff, coaches, student-athletes and members of the community.

This document lays out five main objectives that the department will focus on and also includes a mission statement and vision statement that will serve as the cornerstone of this plan.

The specific points outlined in the plan are academic distinction, athletic distinction, developing leadership, serving as a source of pride that unites all of “True Blue” and maintaining a fiscally responsible department.

“My goal for the group was to create a working document to be used by our department each day as we work to achieve its goal of national distinction in academics and athletics,” Athletic Director Tom Kleinlein said in a press release.

With conference realignment running rampant throughout Division I athletics, having a strong and organized plan will set GSU athletics on track to accomplish Kleinlein’s ultimate goal of making the Eagle Nation a household name.