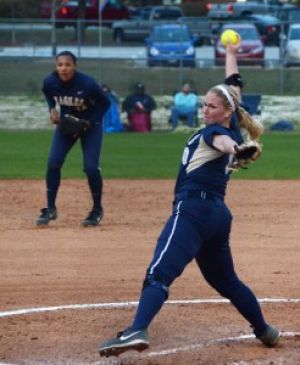 “We know how to win. We won last year. It’s just a matter of tightening up on those mistakes. When you face a good team and make mistakes they are going to capitalize on it,” head coach Annie Smith said.

The Eagles started out the weekend with a double header against ASU and FIU, going 1-1.

GSU started out its first game on a roll with two runs in the first inning, and the game continued to progress in pairs. In the fifth inning, both the Eagles and the Hornets scored two runs, and then GSU got two more to finish off the game in the seventh inning with a score of 6-2.

This momentum did not continue into the next game against FIU. The Panthers scored two runs in the first inning, and the game went completely scoreless after that, giving FIU the 2-0 win. Some key players in these games were senior infielder Andrea Tarashuk and senior infielder Tabby Douberley. Tarashuk finished the day with one run and three RBIs, and Douberley finished the day with two hits and one RBI.

On the defense, Smith is looking to get more reps in and work on communication within the team and offensively she wants to continue to work on hitting on the ground and hitting balls up the gap.

Right after going 1-1, the Eagles had another doubleheader, but played Kennesaw State University to start and then finished with FIU once again.

After a tough loss to KSU, the Eagles had to face FIU once again after losing to them the previous day. The Panthers started out with an early lead with a run in the first and third inning, but GSU got the bases loaded and brought in two runners to tie up the game. In the seventh inning, senior outfielder Alexa Lewis got on base with a single, and with the help of two outs made it to third, then an FIU error brought her home to win the game 3-2.

Finishing out the weekend, the Eagles had to take on the Southeastern Conference Gamecocks. The University of South Carolina also started out with an early lead, getting a run in the first inning. The game went scoreless until the fifth inning when a few errors for the Eagles, and a three-run homerun for USC brought the score to 5-0. GSU kept its energy up, and in the bottom of the sixth inning, when both sophomore infielder Lexi Allen and junior infielder Kourtny Thomas got single homeruns, but in the seventh inning the Gamecocks scored two more runs, ending the game 7-2.

“When (Allen) hit it I was like, great, I have to follow that, but I was just thinking just try to get a base hit, don’t try to do too much. I luckily hit a homerun,” Thomas said.

The Eagles will play at home once again tomorrow against Jacksonville University at 5 p.m. and at 7 p.m.