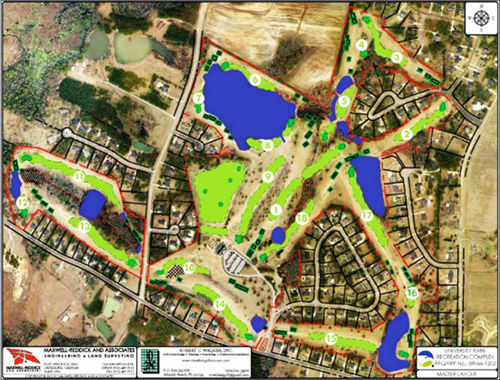 Developers of University Park are working to create a budget to maintain the future golf course that is costing $3.5 million of student recreation fees to construct.

Set to open in the fall this year, the course’s rates and other similar details have not been worked out yet and are still in the beginning phases, Gene Sherry, executive director of Campus Recreation & Intramurals, said.

“Work on University Park is continuing, and we hope to have additional details for the campus community in the future,” Christian Flathman, associate vice president of the department of marketing and communications, said.

“The operating pieces are still coming together. Our director of golf started working on all of it (last) Monday,” Sherry said.

Construction of the course has been the sole focus, Sherry said.

Construction on University Park, formerly known as Southern Links Golf Course, continues despite the rainfall this past month.

According to the construction blog, development of University Park is still well under way but has been delayed due to receiving over 11 inches of rain since Feb. 7.

“We have been able to accomplish some limited work, but at a much slower pace than we had been working,” Patrick Reinhardt, CRI golf course superintendent, tweeted from the Georgia Southern Golf Course Twitter page.

University Park, set to open in fall 2013, is the 167-acre tract of land located six-and-a-half miles from campus that CRI is developing as an off-campus recreational facility for students, faculty and staff.

“The scope and capacity of this particular facility is going to bring recognition to the university. It’s just one more thing that will turn people to look at Georgia Southern,” Sherry said.

“It will be similar to any golf course. You’ll pay to play and there will be cart fees. It has to support itself,” Sherry said. “However, there will be discounted rates for students.”

The price scale is not available yet, Sherry said.

“We’re working on putting stuff together and looking at surrounding areas to get a good competitive rate, but it’s too early to say,” Olsson said.

A clubhouse will be renovated to have two spaces large enough to hold 80 to 90 people, Sherry said.

“Christian Flathman wants to do a media tour soon. I think then we will be able to provide more information,” Sherry said. “This is still phase one, but we want people to know as much as possible.”